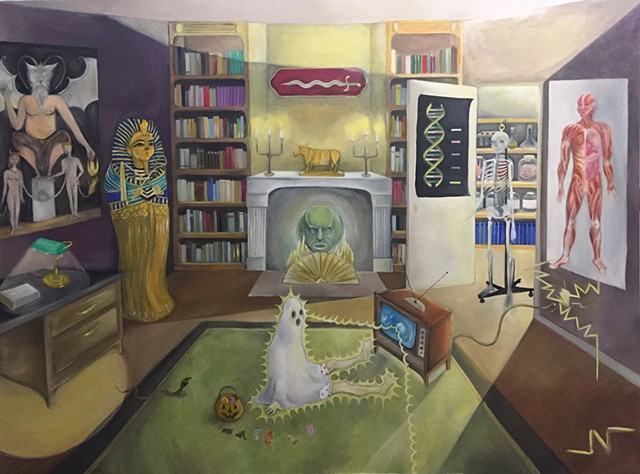 $1200 If you are interested in acquiring this piece please email me at neekaallsup@gmail.com

This painting is symbolic of the clash between religion and science, and how we (symbolized by the child) are kind of trapped in the middle, “hypnotized” by how entertainment teaches us to trust both. The lighting in this painting is symbolic - light is streaming forth from a closet filed with science experiments, a DNA poster and some anatomical props (a skeleton mirrors a muscular systems poster, both seem to be coming alive). Then on the other side, the darkly lit portion of the room, there is one light shining on a Bible that a snake is shooting away from. The snake symbolizes a path to “knowledge” because the snake told Eve about the apple. The snake is now coming towards the child, symbolizing how religion is still a huge presence even though we have science. Other items on the dark side of the room include a poster of the devil, also mirroring the scientific posters of DNA and anatomy. There is a mummy to show tradition and superstition about the afterlife, and in the center of the painting is a jagged, double-edged sword above a golden calf on the mantle because science and religion cut both ways, and neither should be exclusively worshipped. Science has faults, as does religion and lastly to drive home this point, we have The Wizard of Oz in the center of the fireplace to represent how science and religion both seem like these mysterious, esoteric, magical, bigger than us things, but really its just men, “God did not create man, man created God,”